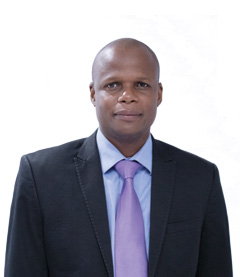 Oupa is the Head of Advisory Services at SNG Grant Thornton. Oupa is also a registered internal audit professional with more than 17 years’ internal audit, IT audit, IT management and risk management experience in both the public and private sectors. He worked for organisations like Mpumalanga Office of the Premier, De Beers Group, and Vodacom before joining Grant Thornton.

He headed up divisions such as IT Audit, Revenue Assurance, IT Advisory and Enterprise IT. He consulted a variety of clients in the following industries; insurance, manufacturing, state-owned companies, national and provincial government, local government, mining, telecommunications